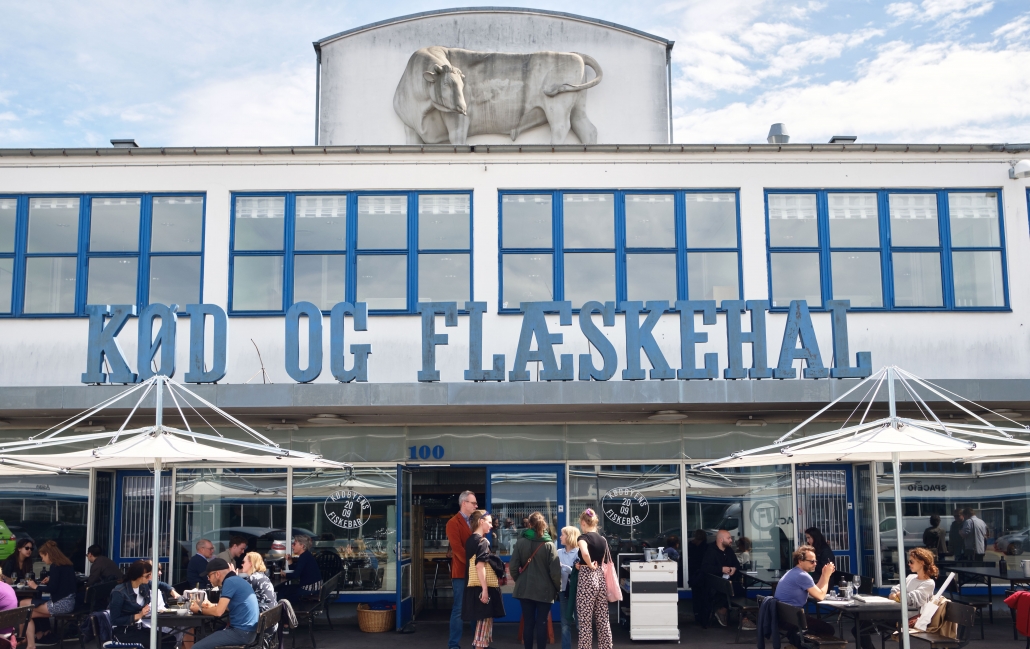 The concrete bull, created by sculptor Einar Utzon-Frank in 1933, still stands tall over the door. This used to be the entrance to Vesterbro’s old meat market, but for the past decade, this has been the entrance to Kødbyens Fiskebar. On 16 June the restaurant turns 10.

It’s been 10 years of fish ‘n’ chips, sustainable seafood, sea buckthorn-cocktails and late-night partying – and 10 years that have transformed the old meatpacking district.

When Anders Selmer and Bagge Algreen-Ussing took over the industrial white-tiled space that became Fiskebaren, their endeavor seemed hopelessly optimistic: To create a vibrant, contemporary fish restaurant with sustainable produce and a laidback atmosphere. But something had started to grab hold of the meatpacking district, which was cordoned off to the public until 2005. 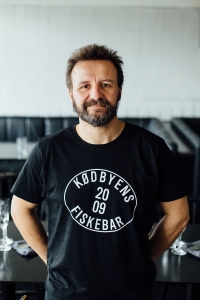 The nightclub KarriereBar opened in 2007, with art installations, lamps designed by Olafur Eliasson, and a conceptual bar menu that offered discounts if you turned up with a homeless person. A few doors down from KarriereBar was Jolene Bar with graffiti-covered toilets, punk DJs and cheap beers on Thursdays.

All of the Meatpacking District had been declared a listed area, so new bars and restaurants had to embrace the industrial interior from where blood and guts had been hosed down through the years. The raw setting quickly became a trademark.

When the Meatpacking District celebrated its 75-year anniversary on 18 April 2009, Kødbyens Fiskebar wasn’t quite a restaurant yet, but still wanted to join the party. So, the head chef took to the small kitchen in the bar next door where he cooked mussels on a single electric hob. Trolleys from Inco was decorated with flowers and used as outdoor tables to serve mussels to the curious crowd. It was – technically – Fiskebaren’s first service.

Some of the very first visualizations of what the restaurant might look like. Sketch by Frits Ahlefeldt.

Before the restaurant was ready to open its doors, Copenhagen design studio Space had been brought in to work on the interior. But when the designers stepped inside the old butcher’s shop for the first time, they fell silent. “The first couple of minutes there was this livestock smell from air being trapped,” says Peter Bundgaard Rützou from Space. “A bit like something dead. We didn’t say much. No words, just smells, and visualizations.” 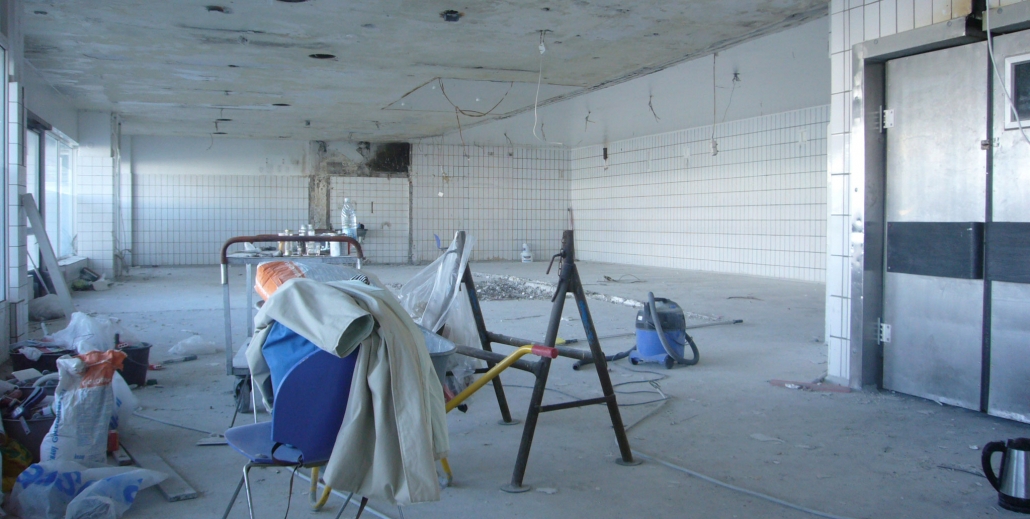 What they visualized was unfulfilled potential in the tattered walls and raw concrete. They wanted to turn decay into design ideas. They want to utilize the drilling holes, the broken tiles and the faded layers of paint peeling off.  “Rather than going against it we embraced it,” says Peter Bundgaard Rützou. “If you look into the restaurant, we have used demolition as a tool for aesthetic expression.”

Space elaborated on the patina feel by using recycled doors for the panels on the open bar which took center stage in the room. The black dining chairs came from flea markets, while a burnt-out welding spot on one of the walls was left intact. The toilets became a wall-of-mirrors, with water overflowing and dripping sounds coming from a speaker, and a giant cylinder-shaped fish tank was installed in the restaurant. 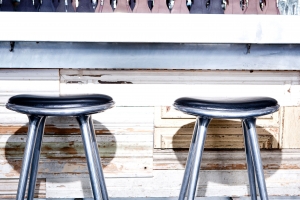 The bar panels are made from old doors. Photo Mads Eneqvist

Conservation rules stipulated that the lowered ceiling couldn’t be altered because of its unique construction. The only option, according to a local government supervisor, was to paint the ceiling. Peter from Space had a different approach. The owners watched with trepidation as the designers started to peel off layers of old paint and fiberglass. They kept peeling until they found the right look and feel. And then left it like that. Each discarded layer told a story about generations of butchers and food businesses. “We tried to see how we could use demolition – the removal and dismantling of things, as basic principles,” says Peter. 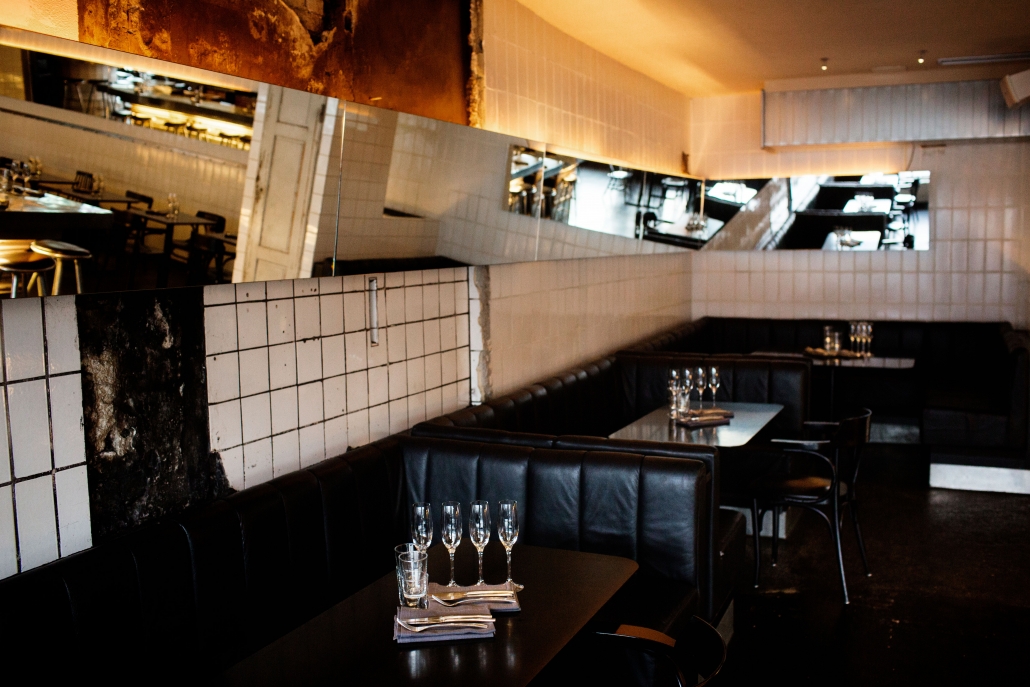 In the kitchen, the guiding principle was – and still is – deceptively simple: Fiskebaren’s menu is guided by sustainable seafood from the Nordic region. Why eat fish from the Mediterranean or the other end of the world when this region offers so much diversity? A sample menu at Fiskebaren may include fish ‘n’ chips made with cod caught in southern Danish waters, hake from the west coast of Denmark, or native oysters from Limfjorden. All clean and sustainable produce which is treated delicately, simply and with respect for the natural habitat. 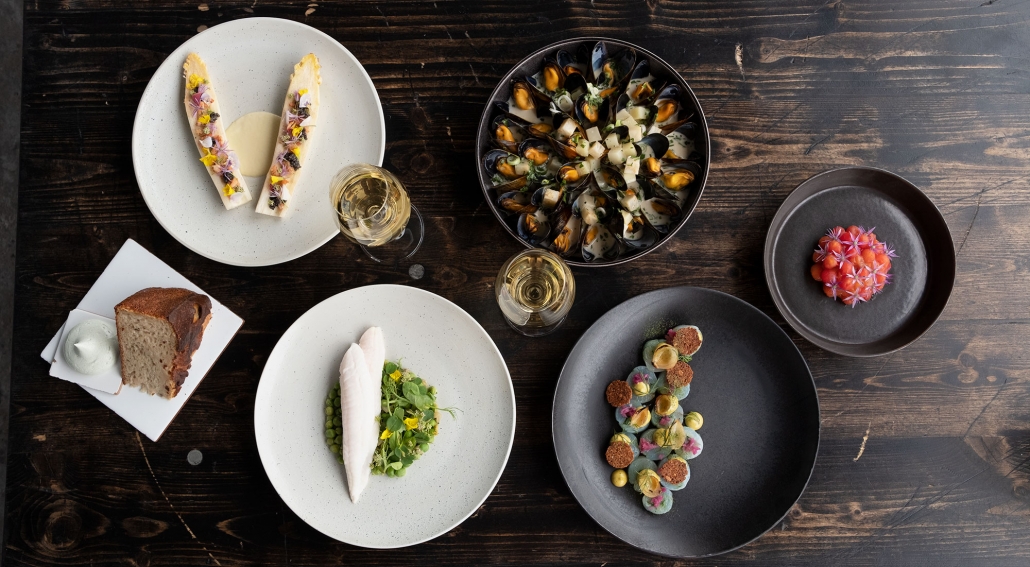 As well as focusing on the environmental footprint, Fiskebaren wanted to challenge an antiquated idea of fish restaurants in Denmark. If you wanted to eat fish in Copenhagen in 2009, you could either go to the fancy, expensive seafood restaurant or eat sushi. Consequently, your options were either a white tablecloth or chopsticks. Copenhagen needed an alternative. And that alternative became Fiskebaren, who went for a casual atmosphere, an urban setting, and younger guests.

Creating a fish restaurant that was environmentally conscious posed a challenge for chefs and owners alike. “Of all the fish that I thought we could be working with,” says Anders Selmer, “it turned out that almost all of them were off limits because they were unsustainable.” Skate wing, much cherished among chefs, was one of the early sacrifices as the restaurant and its supplier drew up strict guidelines for what they could use. Red-listed species such as tuna have never been served at Fiskebaren.

“We don’t supply Fiskebaren with fish from trawlers – we never have, and we never will,” says Jesper Redecker Hansen from Fiskerikajen, one of the restaurant’s main suppliers through the years. “We only work with coastal fishing and fish caught via Danish seine, nets or line when it comes to Fiskebaren. The restaurant might loose some diversity in the menu with a decision like that, but it is an important statement that keeps pushing us both.”

The effort quickly paid off. Within its first year, Fiskebaren was awarded a Bib Gourmand by the Michelin Guide. An honor that is given to restaurants who offers “Good quality, good value cooking”. The restaurant has received a Bib Gourmand every year since. 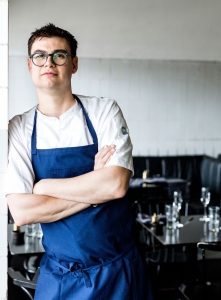 Recently, the kitchen has been headed up by a Brit. Head chef Jamie Lee worked for Gordon Ramsay and Jason Atherton at Maze in London before ending up in Copenhagen via a spell in Australia. Both Jamie and his predecessor at Fiskebaren, the Scotsman Thomas Garland, were intrigued by the relationship Nordic chefs have with nature and produce.

“A lot of chefs are desperate to get closer to nature,” says Jamie. “For a chef, the most important thing is to see where your products come from and not just get them delivered to the kitchen in the morning. Then no-one has a bloody clue where it all starts.”

But food is really only one half of the story. There is no Fiskebaren without the bar. The long counter bar, running the length of the dining room, is the central hub of energy in the room.

This is where you pop in without a reservation, order half a dozen oysters and enjoy a glass of wine that expresses its terroir and is made without unnecessary chemistry. Behind the bar, the cocktail shakers are full of ideas and ingredients that hail from the kitchen. Pea pods and wild herbs. Even root vegetables have found their way onto Fiskebaren’s cocktail menu in an effort to explore new flavors and curb kitchen waste. 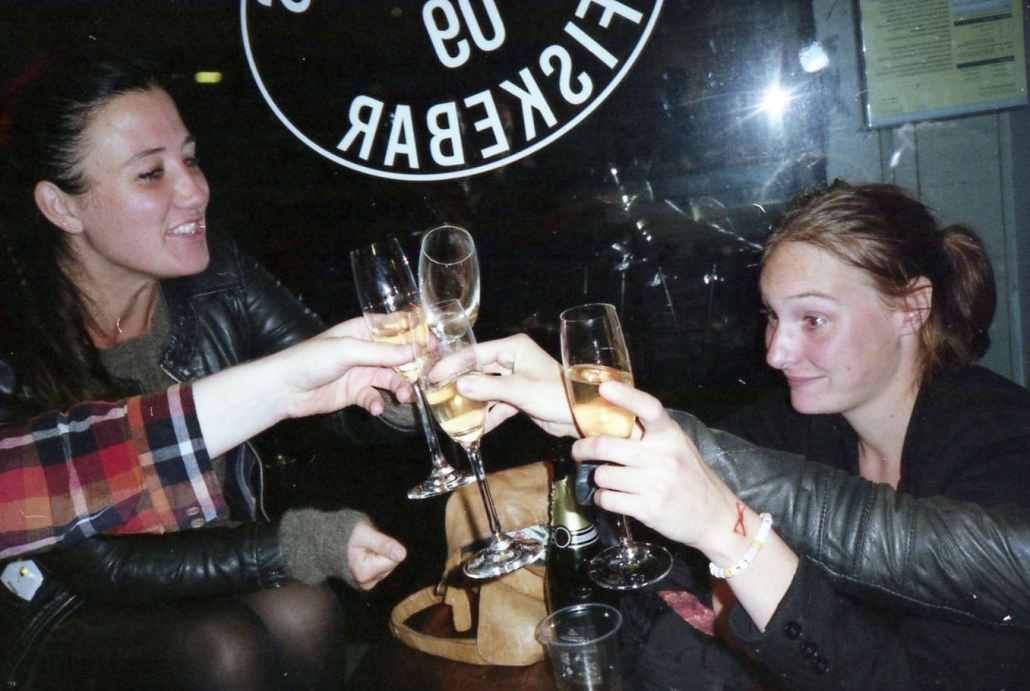 If you really don’t want to call it a night after last orders at Fiskebaren, you just go next door. Here you’ll find Mesteren & Lærlingen, Fiskebaren’s rumbustious sibling.

Mesteren & Lærlingen (the master and the apprentice) is an old pub where butchers used to gather after work for open-faced sandwiches, chain-smoking and way too many pints. As Bagge and Anders prepared to open Fiskebaren, they got whiff that the current owners of Mesteren & Lærlingen saw no future in running the place, and so they took over the bar. They kept its name, its 80s WordArt logo and typeface, the retro-style wood paneling and the smoke-faded interior and injected the bar with young blood from a group of DJs and bartenders.

On Sunday 12 July 2012, culinary royalty turned up at the bar when Fiskebaren threw together a last-minute private dinner party like no other at Mesteren & Lærlingen.

The final of the European football championships – between Spain and Italy – was played in Kiev that night, and Ferran Adria, the Spanish chef behind El Bulli who changed the course of modern cooking, was in Copenhagen and wanted to watch the game.

The impromptu dinner, which also included the revered chef Daniel Boulud, was orchestrated by “the Franks” – Frank Castronovo and Frank Falcinelli from Spuntino in New York – who knew that Adria needed a place to watch football. And that Fiskebaren was mad enough to throw this together with short notice.

The dinner guests sat on folding benches and huddled around a makeshift camping table in the old pub. They were served scallops with cured lardo and horseradish reduction, hake with green and white asparagus, langoustines, lobsters and razor clams. On the football pitch, Spain won 4-0 and retained the European championship.

“I remember that day perfectly,” says Ferran Adria. “We spent an amazing night in Mesteren & Lærlingen. The result and the atmosphere were fantastic. Really an unforgettable night.”

These are memories of a night less ordinary, but a night very much in the spirit of Fiskebaren. And Kødbyen.

No two nights are quite the same, whether you pop in for a quick pint, a bowl of mussels, a seven-course meal, or end up going into labor in the toilets (yes, it happened, and the baby was delivered safely at a local hospital).

The last 10 years have transformed Copenhagen’s meatpacking district into a freewheeling haven of gastronomy, clubbing, and food markets. From techno nights to internationally acclaimed tacos.

And in the middle of all this, underneath that concrete bull, Kødbyens Fiskebar is still open for business. Ten years old and as hungry as ever. 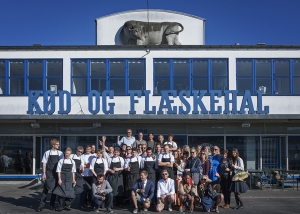 Staff in the early years.